20:52: Here we are, ready for another exciting day. I want to try to do some more cleanup of my shipyard. My goals for today are to draw the piece you’re about to attach in kind of a transparent state, handle mirroring of objects (at the moment, I’ll assume you always want to mirror the ship, even though that’s not always the case) and drop in a second type of object to attach. Just to mix things up.

I’m thinking positive. I’ll be lucky if I get even one of those done tonight.

21:14: Well the mirroring wasn’t so tough. I also added in the detection of “spinally mounted” objects. That is, objects that are so close to the center that the user probably intended for it to be exactly in the center, and also shouldn’t be mirrored.

21:47: I’ve also now got a communications dish as a second part that you can add to your ship.

22:05: And now I’ve got the piece you’re adding being drawn transparently! That’s everything I set out to do, and done in only a little more than an hour! Time for some pictures of the current state of development.

This first picture shows how objects are mirrored side to side. Things that are “spinally mounted” are not mirrored. There’s just one, and the game helps you get it centered. 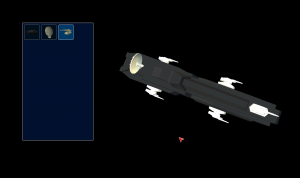 This shows the silhouette of the thing you’re about to place on your ship: 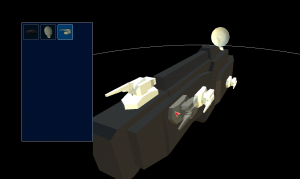 Overall, I’d say today was about as successful as weekdays come! It’s really nice to have one of those every once in a while.