9:07: After all of that math yesterday, I think I’m in the mood for some art. I think I’m going to start by trying to make my combat engine look a little nicer, starting with maybe a skybox, and some improvements to what the grid looks like. The blue lines just aren’t cutting it for me right now.

11:08: Wow. That was a fast two hours. I got the two things cleaned up that I had mentioned, and magically, this is starting to look like a real game. It’s amazing what skyboxes can do.

I’m attaching an image of what things look like right now, but then I think I’m going to go back to the transformation stuff that I was doing yesterday. 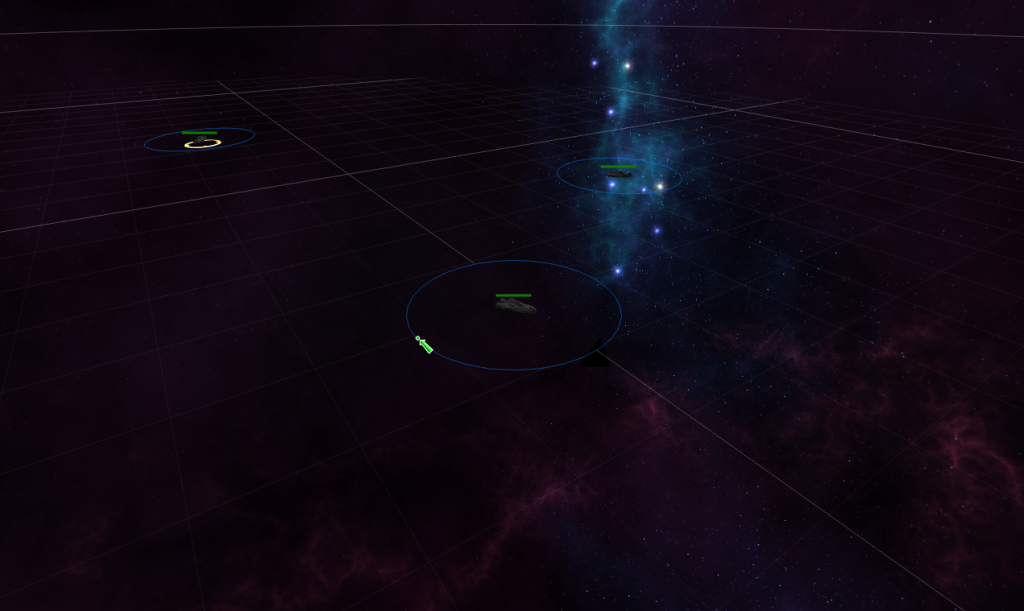 16:31: I got my ray transformed into the ship’s various parts’ coordinate space. Took me a little longer than I thought, because I was transforming them the wrong direction. I couldn’t just transform them using the normal transformation matrix. I had to find the inverse of that matrix and use that. I probably should have known that. Dumb mistake, but I figured it out before wasting too much time on it.

Now I can select the parts of my ship! Sort of. (It’s really rough.) That was the whole point of all of the work I did yesterday. But it’s actually not integrated back into the main engine. It’s kind of it’s own thing. I want to do a few more tests, and a little cleanup, but then I’ll be pulling these changes and additions back into the main game.

19:05: I’ve gone through and done some code cleanup and some bug fixing. I’ve got a fairly stable version set up now, which demonstrates the important pieces that I’ve been working on. I don’t know what else might be happening tonight, but if that’s my final version at the end of the sprint, well, it’s something that I can be proud of, I think.

You’re probably sick of me saying this by now, but I’ve still got a very long way to go…

20:14: I’ve got most of that transformation work integrated back in to the shipyard. Enough that I’m probably going to go remove the Transformations Screen, where I was doing all of that work. And where I got that strange spider/virus looking thing yesterday. But do you remember all of that work I did to mirror the ship or deal with spinally mounted objects? I broke it. Now that the hull of the ship is more than just a single object, that code needs to become a lot more mature as well. So no mirroring anymore.

Another picture in a couple of minutes..

21:11: Here’s the picture I promised. I also added in the ability to start building a ship fresh, by leaving the shipyard and re-entering it. I also partially fixed a bug where you can’t attach anything facing downwards. Except that there’s still something wrong with it because you don’t seem to be able to attach anything to an object that is attached facing down. Strange… 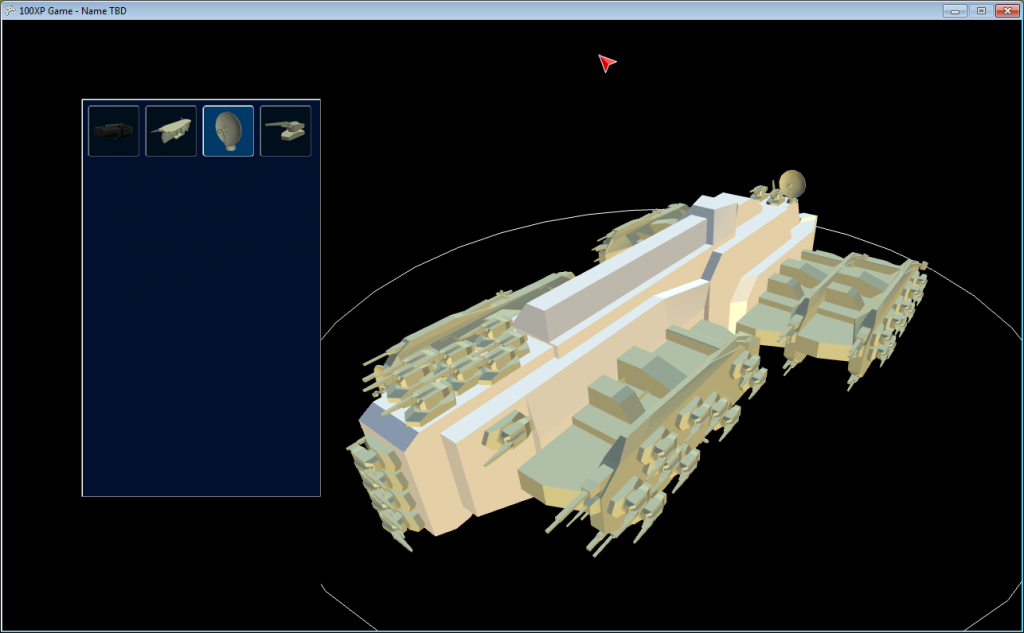 21:47: Lots more bugs fixed. I’m done coding for the day. Going to go do some Scrum related things for the last little bit before heading to bed. Overall, I feel really really good about what I got accomplished this last week, and this weekend.

But do you think I’ll ever stop feeling like there’s a lot to do still? Even too much?