I honestly don’t know what happened this last week. It was really strange. A week ago, things were going along so well. I was making great progress. Things were happening. I was excited about what I was making and was proud of it. (Those last two things haven’t changed.)

Then suddenly, BAM. I was dead in my tracks.

I’m not sure I can pinpoint the actual problem. I wish I could, because that would go a long way towards helping me figure out how to prevent it from happening again. I suspect it was at least partly diving into a bunch of the art stuff, which isn’t my strength. The thing is, the art side needs to happen somehow and sometime. I can’t just pretend it doesn’t exist. I have some ideas, but the sheer vastness of the unknown in that particular direction is unnerving to me.

I think another part is the fact that the scale of the game I’m envisioning, contrasted with the 66 days I have left… well… let’s just say I’ve come to a very clear realization that I know I can’t build the game I wanted in that 100 days. But I don’t know why it’s impacting me so much. I pretty much knew that was the case going in. So why it’s weighing on my mind so heavily right now is a mystery to me.

But I also think that this is just what happens to game makers some times. I don’t know that there necessarily has to be an explanation for it. It’s part of being a human, and a part of creating something that pushes your limits.

Maybe in 66 more days I’ll have more answers for you.

In the mean time, I’m actually kind of excited to be doing this little reboot. Kind of switching gears and retooling, aiming for a fully playable game as quickly as possible. (With the pseudo-goal of doing so by the end of the weekend.) My mind is a little more at ease, knowing that I don’t need much in the way of art for this. Just pushing forward and building an interesting game.

I’ve got my scalpel out and I’m ready to be ruthless in deciding what goes and what stays. That’s my first priority for the weekend: set out the things that are minimally necessary to have a functional game. Here goes. Again.

20:45: I’ve got a whiteboard full of notes on what really needs to be accomplished this weekend, and what does not. (I’m using the term “this weekend” loosely here.) My next step is to make a few quick mockups of the important screen. You’ve already seen the battle screen and the shipyard screen. I want to kind of flesh those out more, and also important will be the Fleet Command screen, where you decide what ships you want to have in your fleet, and what ships you want to deploy into the upcoming battle.

If I get anywhere close to what I’ve got envisioned for this first “alpha” version, this is going to be so awesome!

The good news is, at the moment, I feel like I’ve got quite a bit of energy. If it lasts, it may mean a late night, and getting lots done. But we’ll just have to see what happens. That can change insanely fast.

Why am I doing this to myself again? 😀

22:02: I’m still working on these mockups. I’ll be posting some of them for you to see (and give feedback on) when I get done. But I like the way things are going.

1:09: Technically, it’s not day 34 anymore. But since I haven’t gone to sleep, I’m still counting it that way.

I’m really close to finishing these mockups now. I think I’m going to just stay up until they’re done and then post a few. I keep getting more and more excited about this game as I make these. And I guess when it comes down to it, if this is all I really accomplish this weekend, that would be a pretty good step forward.

2:31: OK, now I’m exhausted. I’m going to upload some pictures of my mockups. Remember, this isn’t what the game looks like yet. Just what I’m thinking it may look like.

I’d love for you to leave some comments or send me an email with any feedback that you have. I’m 100% positive there’s something in all of this that you’ll look at and say, “Hey, that’s not too shabby!” And something else that you’ll look at and say, “Wait, what? That looks dumb/doesn’t make any sense.” I’d love to hear both. Honestly, now is one of the best chances to provide feedback on the way this game will look.

Here’s the mockups. You should be able to click on them to open them up in a larger size.

First is the idea of infocards. Whenever you hover over a ship, or a part of a ship such as a gun, this little thing will pop up to the side, giving you the details about whatever it is that you’re looking at. 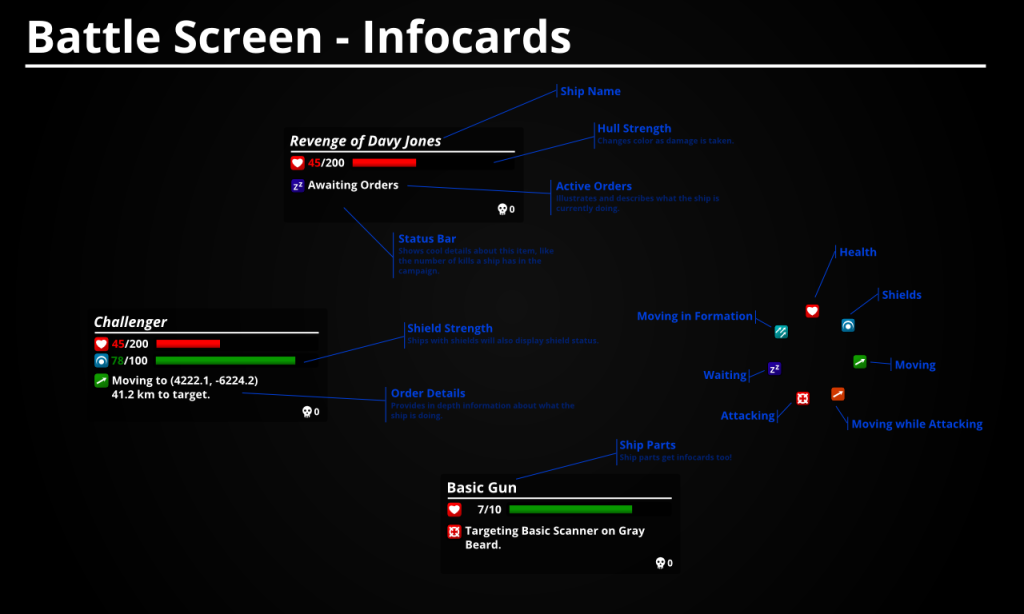 Next is the fleet command screen, which you haven’t seen any of yet. Basically, this is where you’ll manage your fleet as a whole. It’s from here that you’ll jump into the shipyard to build and design ships. It’s also from here that you’ll start new battles or campaigns (sets of battles that may play out differently, depending on whether you win battles or not).

Pretend the triangles are actual 3D models. That was way too tough to do in a mockup, so I turned my beautiful ships into triangles.

As you go through the game, you’ll end up doing things that require the equivalent of a modal dialog. That’s what this next mockup is. This bar will pop up from off the bottom of the screen and the rest of the things will fade out a bit. You have to choose one of the buttons below to dismiss the modal dialog. 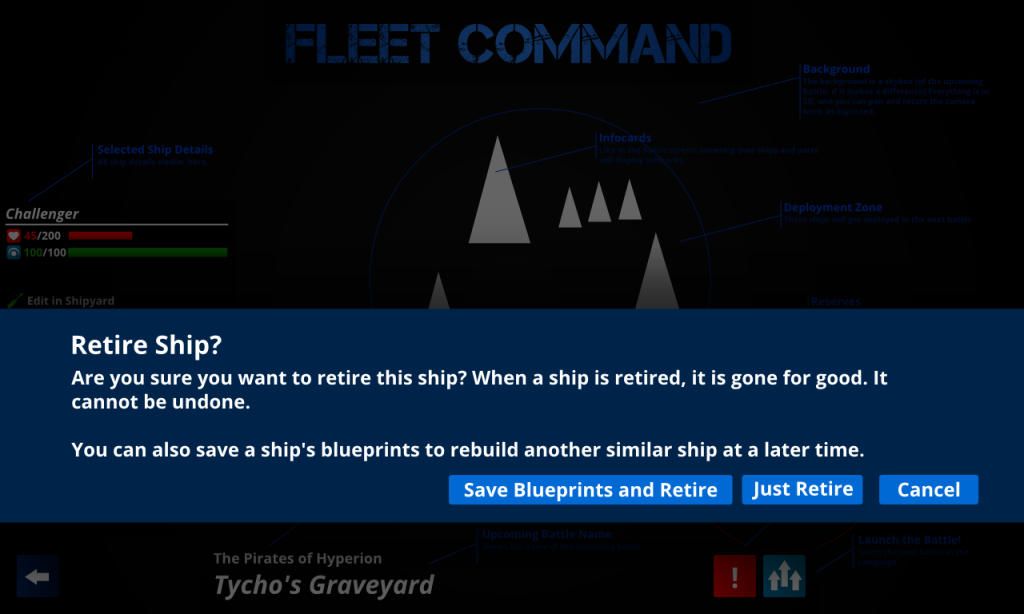 It could come in all sorts of colors too: 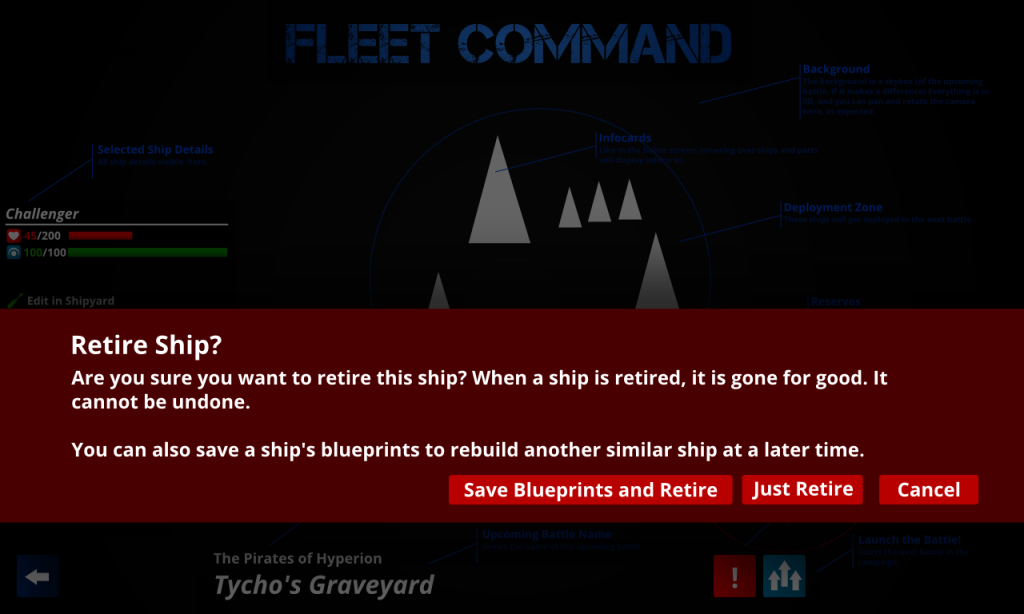 And now for something you’re all a little more familiar with: The Shipyard. This begins to give you an idea of what this will look like. Inventory (or whatever I’ll call it) on the left, part details on the bottom left, and the ship-wide properties on the right side. 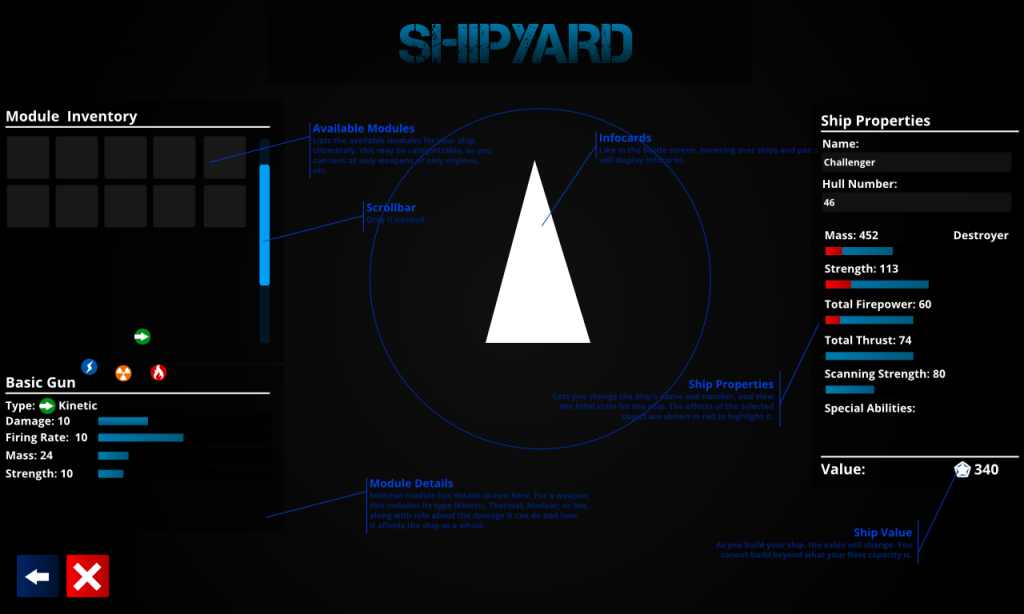 Any feedback at all is welcome. Don’t like my fonts? Say so. Don’t like my colors? Say so. Don’t think there’s enough contrast with the transparent black backgrounds? Say so. Please say anything. It will be very helpful to me. (And this still holds true when this post is very old, though there may come a time where my response is, “great advice for the next game, but this is set in stone now for this game.”)

I also suspect that for some of you, what you see here will bring up a ton of questions about different aspects of the game. Anything that you’re curious about, or nervous about (because you think I might be headed in a dumb direction or something), or excited about, I want to know!

Have I said that enough yet? I’d love feedback!

Anyway… it’s quite late now. I’m going to go to sleep and I’ll be back in the morning to actually try to make some headway with the game. After all, I want a fully working version of the game by Sunday night, right? 😀