8:12: It’s strange to think now that I’m 25% of the way done with this little experiment. And despite recent successes, it’s hard to not feel very overwhelmed. But… I’m trying to have a positive attitude. The game has come a long way as well. I just have serious doubts as to whether I’ll even come close to what I was originally aiming for. Maybe it’s time to start thinking of simpler versions of this that are more accomplishable. I don’t know.

Let’s not panic until I have another weekend to focus on this game. I usually get a lot done on the weekends.

I’ve been working on selection and revealed a pretty significant little limitation to the bounding box stuff that I was doing yesterday and the day before. No, none of it is broken, it’s just going to require a little work.

So I’m basically doing selection based on the bounding box. But some of my hull pieces are shaped in such a way that when you stick a gun on the hull, the gun is completely contained within the parent’s bounding box. It becomes unselectable. 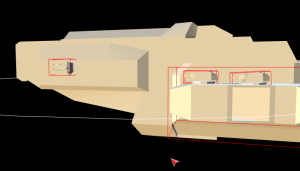 I was actually expecting this problem to come up sooner or later. I just figured it would be later, not sooner.

8:41: Fixed! Multiple bounding boxes are running correctly. If all goes well this evening, I’ll likely be able to check of ship part selection from my list tonight. 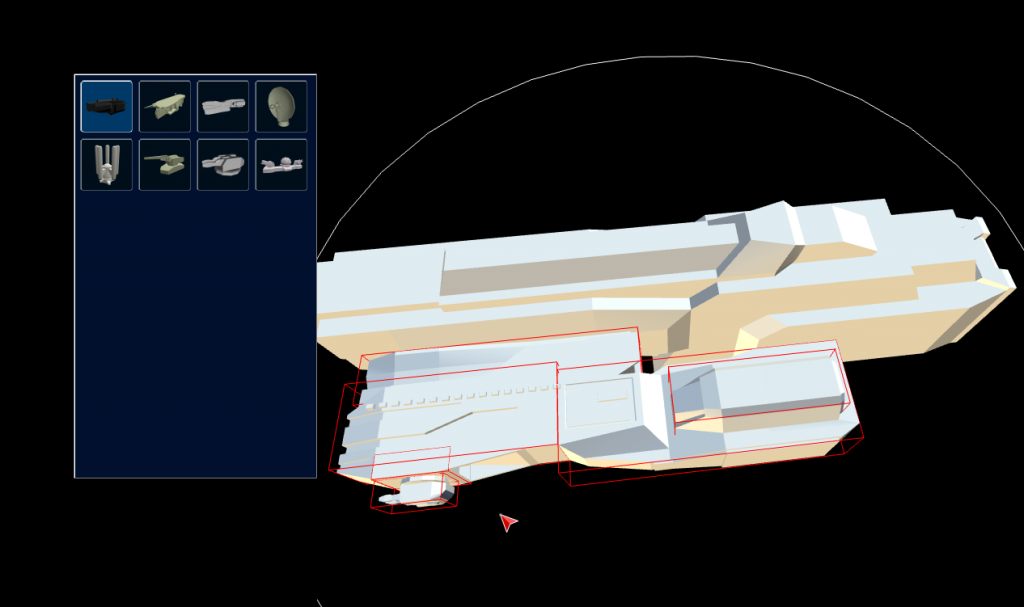 21:01: It seems like with these earlier mornings that I get a later start in the evening. Doesn’t it seem like I was back by 7 or 8 PM usually? I don’t know why I’m usually getting started at around 9 PM this week. I wonder if the earlier start really just pushes everything else back.

But I’m back for another hour or so. I’m hoping to get selection cleaned up and working, but I know I’m already pretty dang close.

22:08: I’ve got selection and deletion working now. I’m now moving to the last big piece for this sprint: being able to drag and move already attached parts to another location.

22:22: That’s it. I’ve got to stop. I’m dragging. I might as well go to sleep and keep going in the morning. But the good thing is, my clicking and dragging objects is working at a basic level. There’s more to do to clean it up, and that will take time, but it’s coming along just fine.