I’ve got some real information populating the infocards now. You should see things like your ship’s health and what it’s trying to do. There’s definitely some cleanup that needs to be done still, but I thought it would be worth a new daily build anyway. (After all, you guys who are downloading the daily builds know that it’s not intended to be functioning correctly, necessarily.)

For those of you not so interested in actually downloading this, here’s a quick screenshot: 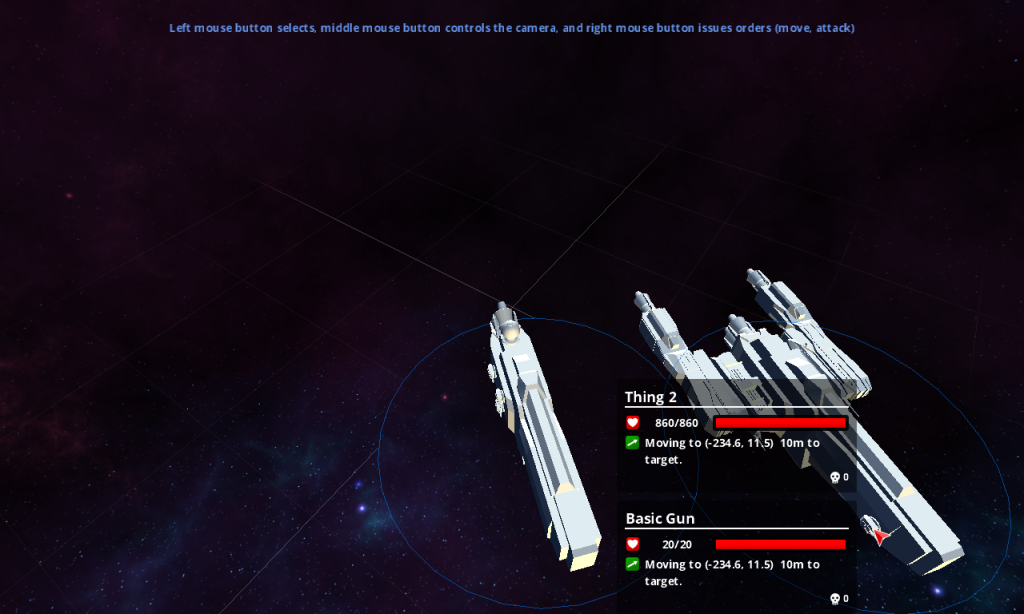 I feel like I’m doing way too much “here’s what I did”/status update kinds of things, and not enough of the other things that I had intended to do with this blog. So here’s a quick glimpse into the emotional side of things right now.

Over the last few weeks, I’ve slowly come to the firm realization that I’m not going to have a complete game, in any sense of the word, by the end of the 100 days. At first, I was depressed about that. I had hoped things would come together. These days, I spend a lot of time sitting here thinking about what I actually want to accomplish instead, knowing I’m going to fall far short of my original goal.

And I find myself thinking about what happens after the 100 days.

I specifically chose a time limit because I wanted to be sure that this game wasn’t going to absorb the rest of my life. Can I imagine working on this game two years from now? Probably only if it is bringing in enough money for it to be my full time job, but I’ll be surprised if that happens. So what does happen to the game at the end of 100 days? Is there another 100 days? Do I change gears and do a Kickstarter? Do I put it up for sale and see if people will pay for it while it’s still in development like Kerbal Space Program? Do I say, “That was an awesome game I made, even if it was incomplete, but now it’s time to move on to the next great adventure”?

I honestly don’t know, though it fills up a lot of my mental power. I don’t worry about it too much. I just think about it a lot. There are so many possible ways for this to turn out, right now, and I think it has been kind of fun to see how it unfolds.

Woo, bug report: I apparently ordered my ship to attack itself, and the infocard only displayed “Attacking ShipName”, no movement or position data.

Also, for what it’s worth, I was attracted to this thing not by the idea of a finished product, or being able to play an RTS in 100 days, but to read from the point of view of making a game. Honestly, it’s your project. Do with it what you will… just keep writing about it. 😛