Prepare to be amazed.

I’ve gotten a lot done this weekend. New update available as of a few minutes ago. If you’re new here, here’s the download link: http://100ExperiencePoints.com/daily/100XP-Setup.exe.

Some screenshots are in order. Here’s a real battle: 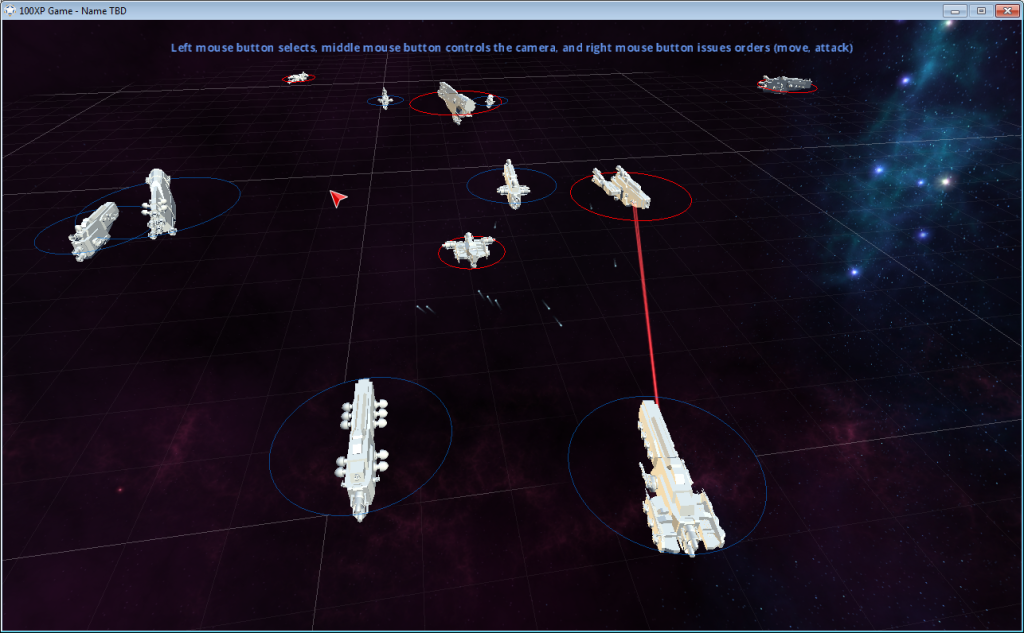 And a screenshot of the band box selection: 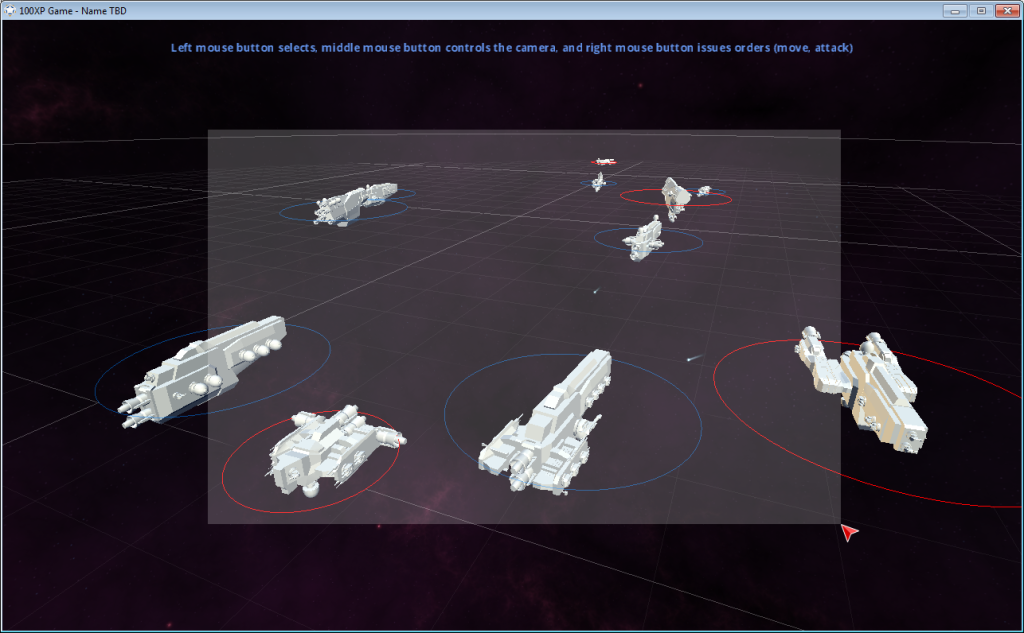 Ultimately, there will be a limit to how big your fleet can be. The basic idea is that you’ve got a certain number of points that you can spend, and you can spend them in any way that you see fit. Lots of smaller ships, or one giant beast of a ship. Emphasis on speed, or an emphasis on radar to constantly evade your enemy. It’s all up to you.

One of the pieces that I put together this weekend is a component that calculates the value of a ship. It’s far from perfect. For starters, it’s always estimating a little too high for what I really wanted. My limit was going to be 1000 points for the whole fleet. Until I get it fixed, for the moment, pretend the limit is 1500 instead. That’s about how much I think it is off by.

So how big is your current fleet? Unfortunately, to tell, you’ll have to go in to each ship to find out, then add them all up. But I’m genuinely curious what feels right to you guys. By the current measurement, does 1500 points seem like too much to handle? Or like it’s not enough to do what you want? For the sake of fairness, the enemy fleet probably weighs in at about 2000-2500 points. It’s tougher than you. (But in your defense, you should know that the AI will only fire at the first ship that it can see. And if that ship is out of range, it does nothing. That’s a pretty limiting problem which will be addressed eventually.)

Right now, you’re not actually limited to any hard and fast limit. I want to get people’s initial impressions of the concept in general, and kind of an initial feel for things. There’s still time to change things.

I have mixed feelings about the adaptive zooming I implemented. On one hand, it feels a lot better when you’re zooming in to some particular ship. To me, anyway.

But it also seems like if you’ve got the camera turned at a strange angle, and try to zoom in on something really distant, well… I’m not sure I like how it works. The thing is, I can’t put my finger on why it doesn’t seem right. So if you’ve got any feedback on whether you like how it works or not, I want to know. (I won’t feel bad if you tell me you liked the earlier versions better.)

I’m curious what you guys thing would be the next best move for this game. I don’t have a ton of time left, and I’m still trying to decide what to do when the 100 days are over. For now, I don’t want to plan on/expect more time beyond that. I want to have things tied up nicely when the 100 days ends, even if I keep going after that. (I’ve also got several other ideas that I think you guys will find interesting as well.)

For starters, if you find bugs, I want to know about them. As things start to wind down, I’ll be spending quite a bit more time debugging. I’ve always tried to get things to you without any bugs, or at least with telling you what bugs to expect, but you guys seem to find a bunch more anyway. If you see a problem, let me know.

But what else? If this were your game, what one additional feature would you want to make sure gets implemented? If you were a player, what one thing would help convince you to buy the game? (I know, I know. I’m a long way away from having something that could actually sell. That’s OK.) For the record, I should have time to do a lot more than one single additional thing, but I’m hoping to get feedback from multiple people, and kind of see where things are at as far as prioritizing things.

One final note before signing off tonight. This is the first time during this whole adventure that I’ve started to feel sad that it’s ending. Like I said, there will be plenty to do on this game after 100 days, and I may continue working on it. But even if I do, the big adventure of making a game in 100 days will be wrapping up.

I wasn’t expecting the hint of sadness that I’m feeling. Not yet anyway. I’m not sure what to make of it yet.