I apologize for what I’m about to do to you, but I’m going to give you a build that is sort of half complete. Tonight I’ve been working on shield generators for the game. One of my biggest priorities right now is to bring the damage engine in line with what I expect it to do. It may take a few more days.

What you’ll get tonight is a partial implementation of that. I’ve added a new part: a basic shield generator. When the 100 days are up, I hope to have a smaller shield generator and a larger one as well.

Here’s a screenshot of the shield generator: 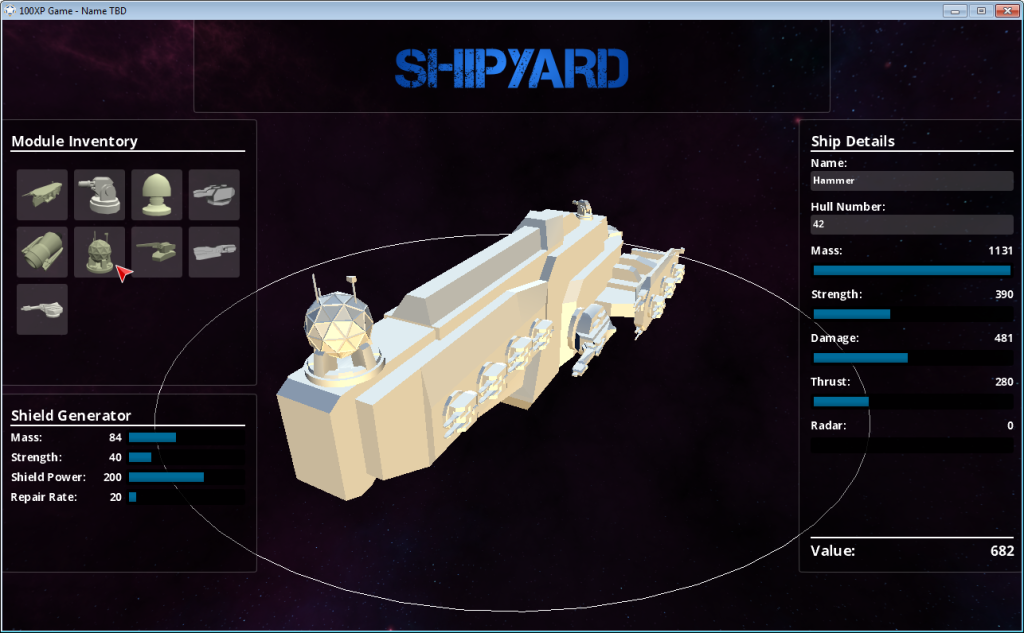 The problem is, it doesn’t do anything right now. It’s basically just a decoration. I hope that I’ll have it actually doing stuff by tomorrow night, but no promises.

I suspect the concept of a shield and a shield generator will be familiar to pretty much anyone who has seen a science fiction movie, or played a science fiction game, but to summarize, as long as the shield is intact, it will take the damage instead of the ship. It will protect all parts of the ship, including the hull, engines, weapons, etc. As long as the shield generator is intact, it will heal itself slowly over time. This makes it so you could go into battle and after taking damage to the shields, run away and recharge, then return later at full strength again.

There are two drawbacks that I’m thinking about including for shields. First, I think I want them to be kind of big and heavy. So between the shield and the additional engines that you’ll need, you may not have as much room for weapons or radar as you’d otherwise like. (There should always be a trade off, to prevent guaranteed winning strategies.)

Second, while multiple shields will have a cumulative effect, it won’t be purely additive. In other words, if one shield generator gives you 200 points of damage that it can absorb, two will give you something less than 400. Perhaps something along the lines of 350. Three wouldn’t give you 600, but 450. There will be a simple little algorithm, based on a logarithmic scale, so the theoretical maximum is infinite, it just becomes more cost prohibitive as you add more and more.

Anyway, enjoy looking at your shields, and hopefully they’ll be operational tomorrow night.

So, uh, is symmetry or some way to lock things to axes on the list? Everything always being slightly misaligned is infuriating. :P

Did I talk about my list of priorities already? I can’t really remember. I know I sent it to someone in an email, I just don’t remember off the top of my head if I wrote about it on this blog. Yesterday, I asked for the one feature that people would add, if they were in charge. I made my own list of the 5 Must Haves remaining. (It had six items on it.)

So it does have a pretty high priority, but it’s lower than finishing the damage engine, sound, explosions/particle effects, and a few other things. I’ll post my list tomorrow for you guys, if I get some time.

Heh, that was supposed to be a figure of speech. But okay.